Painted oak altarpiece, made in a North German workshop in the last quarter of the 15th century.

This altarpiece comprises a corpus and two pairs of wings. The corpus is divided into five parts – one large, central part and four smaller ones surrounding it. The main niche depicts Golgotha, with Christ crucified and surrounded by the thieves and angels. Below him, to his right, stands a group of people consisting of the Virgin Mary, St John and sorrowing women. Behind them stands blind Longinus, who, in keeping with tradition, should be the person who, aided by a soldier, is thrusting the lance upwards at Christ, while with one hand he points to his eyes, reminding us of how his sight was restored by Christ’s blood. Here instead he has been given the reed with the sponge soaked in vinegar which, tradition has it, was put to Christ’s mouth.

Mary Magdalene is embracing the lower part of the cross, and a man seated in front of her is writing the letters INRI of the superscription which will be fastened to the cross. Below the cross, on Christ’s right side, stands Stephaton (Steven), who is holding a spear instead of the reed with the sponge soaked in vinegar. Perhaps there has been a mix-up here, with Longinus’s spear and Stephaton’s vinegar-.soaked sponge changing places with each other in the course of time. The centurion stands beside Stephaton, and in the very front Christ’s robe is being fought over and a man is holding the dice.

In the beholder’s perspective, the two smaller niches to the left of the centre scene contain carvings on the theme of the Virgin and Child with St Anne and of St Erik. Those on the right contain St Olof and St Bridget. The wings have six carved figures each. These represent the Apostles, but, some of the attributes have been lost and replaced in the early 20th century, the figures are now very hard to identify. Paintings on the back of the left wing show the kiss of Judas, Christ being arrested and Ecce homo. The right wing shows Christ before Pilate and Christ being led away. 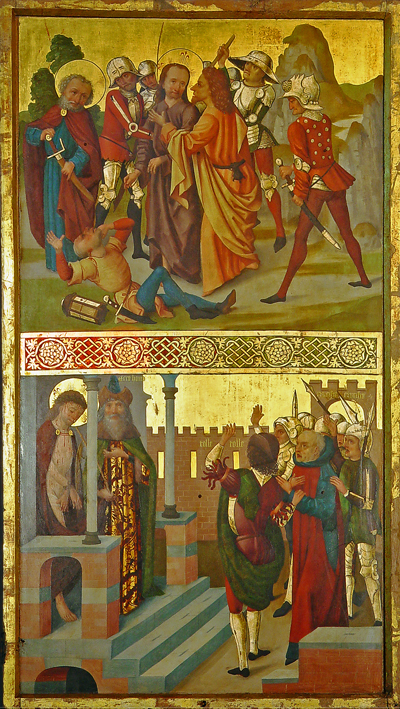 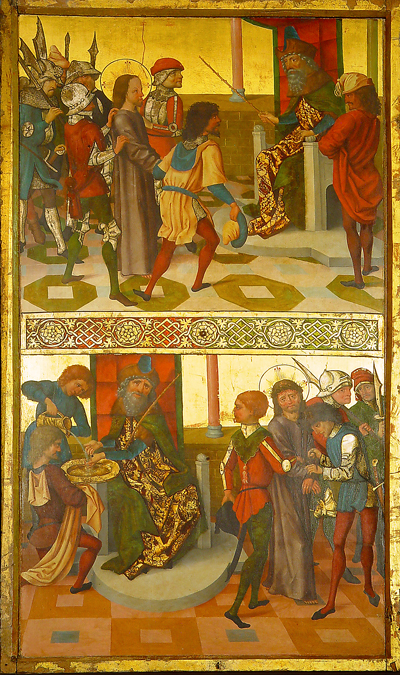 This altarpiece depicts the Passion of Christ, his arrest and flagellation and, finally, his execution. The depiction of Christ’s sufferings is relatively restrained, whereas the group of mourners on Calvary is far more realistically and creatively executed, as are the soldiers fighting over the seamless robe. The altarpiece narrative focuses on the human element – greed and suffering, grief and hope.

The origin of this altarpiece is a moot point. In addition to North German origin, it has also been claimed that this is the work of Stockholm woodcarvers under German influence or of immigrant craftsmen from Lübeck. The paintings are, with some hesitation, ascribed to the workshop of Bernt Notke.

The wings are now in Västeråker church. 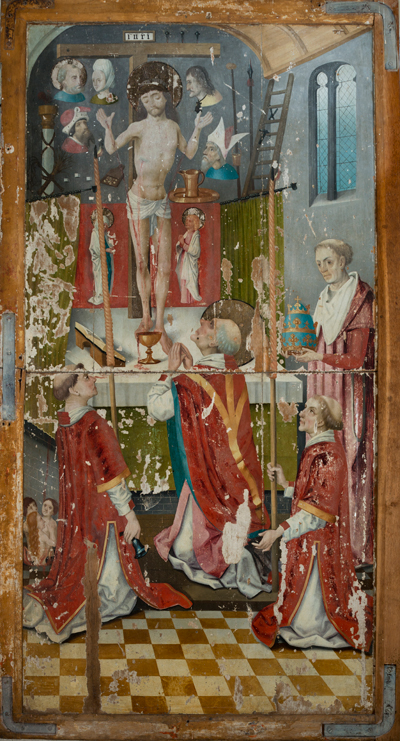 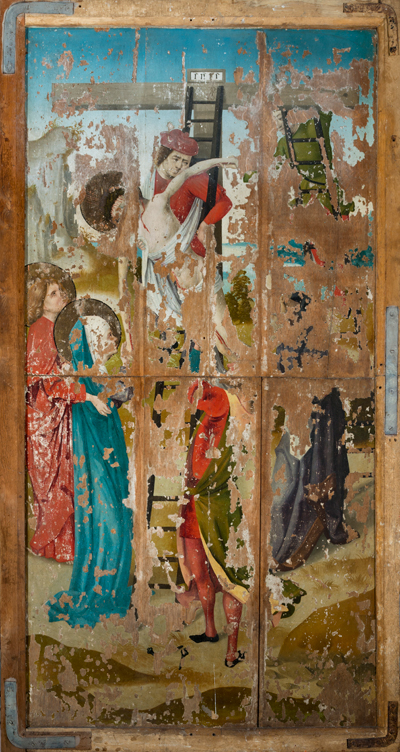