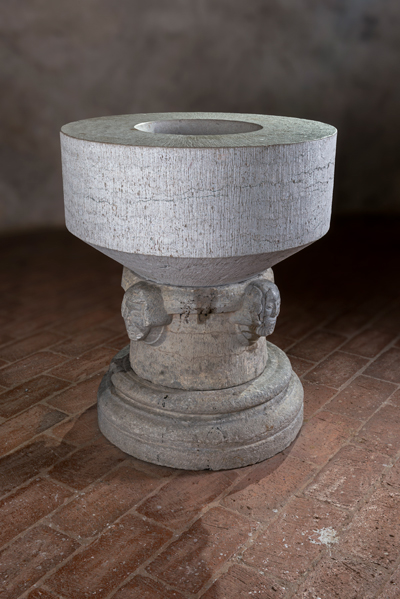 Baptismal font of calcarius limestone. Made in Gotland during the mid-13th century. The font has three parts: foot, node and bowl. The original bowl has been lost, and a new one was substituted in 1950.

The foot consists of three plainly designed, hollowed-out roundels. The 1950 bowl consists of a heavy, machined block of stone with a space in the middle of the bowl for an insert. It has no images. The shaft is decorated with four male heads, two of them bearded and two beardless. All four have their hair cut straight on a level with the cheekbones. One of them differs from the rest in not having a fringe. The fourth man does not seem to have any hair at all on the crown of his head. Their faces are plainly and stylistically modelled. The eyelids round the wide-open eyes are clearly marked. The two beards differ in style. One of them goes in vertical waves, shaped round the mouth, while the other is built up round an epicentre in the middle of the chin, working out from there in near-circular ripples.

With some slight hesitation, these four faces could be construed as representing the four rivers of Paradise, where, the Bible tells us, they took their source. These rivers were to flow out into the four corners of the world, just as the Christian message was propagated by the four gospels.

The baptismal font was one of the main features of a parish church. This was where new parishioners were initiated into the Church. The font stood just inside the door, and an unbaptised person could not go any further without being christened first. Only then were the forces of evil taken to have been expelled from the child, so that it could be reborn in Christ. The original font probably had a bowl in which the child could be immersed completely.

The practice of immersion waned in the course of the Middle Ages and was superseded by our present practice of symbolic immersion (affusion), with the priest pouting water from the baptismal bowl over the child’s head. 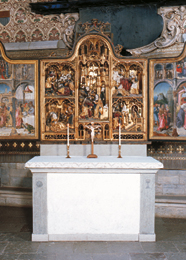 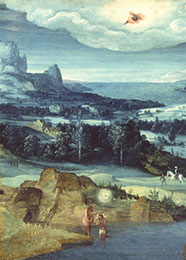 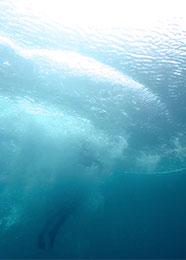