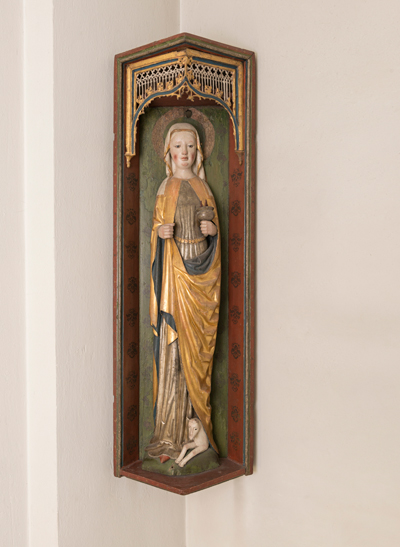 Catherine is wearing a silver-coloured gown and a golden mantle with a blue lining. Her gown has wide longitudinal pleats, and the mantle, which she holds up in her right hand, is draped in large, soft folds. In her left hand Catherine holds a burning oil lamp, and in her right she probably held a lily, now lost. A white hind lies beneath her mantle. Catherine stands in a dorsal which an architectural framework of Gothic tracery. The dorsal is painted green, with a red and black frame. Specially made for Bollnäs Church, this dorsal is a companion piece to St Bridget’s. 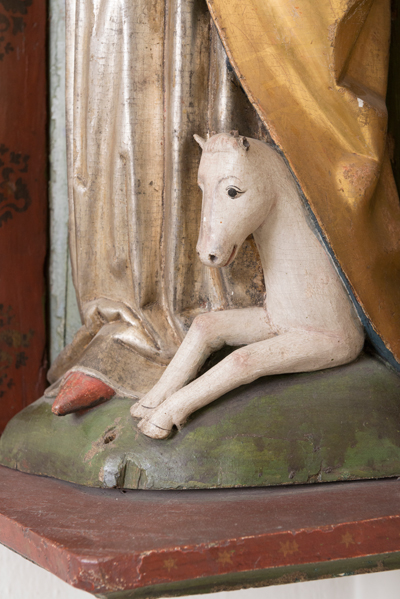 Legend has it that Catherine of Vadstena was unusually tall, and this is conveyed by the stature of the carving. The hind reclining at her feet is her attribute. The legend tells us that she had rescued it from pursuit by a huntsman. The oil lamp she is holding alludes to her being a “wise virgin”, as in the Bible story of the ten virgins, of whom the wise ones had bought oil for their lamps and the foolish ones had omitted to do so. It was not at all uncommon for Catherine and Bridget to be paired together as saints, showing how the Bridgettine Order lived on through St Bridget’s daughter. It was Catherine who, in 1378, obtained approval of the rule of the Bridgettine Order from the Pope in Rome.