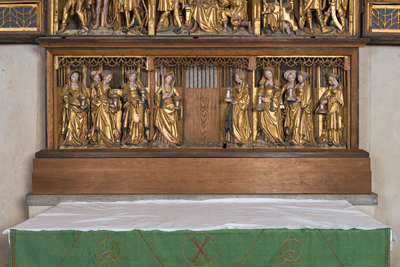 Predella figures, carved in oak. Made during the early decades of the 16th century. The ten figures are polychrome painted. The theme of the predella comes from the parable of the (five) wise and foolish virgins.

The group on the left comprises five women, the wise virgins. Their faces are round and rosy-cheeked, their hair long and blond. All of them are wearing gold-coloured, draped costumes with blue details. Not all their costumes have the same cut. Instead they seem to be individually designed. They are holding lamps filled with oil. 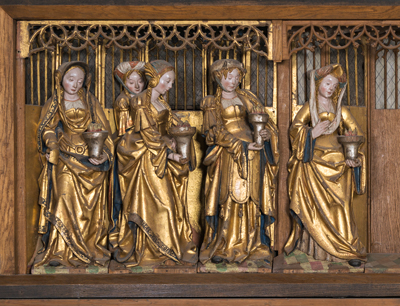 The right-hand group comprises the five foolish virgins. They too have costly and highly detailed apparel and are holding oil lamps, but their lamps are upside down, i.e. empty. 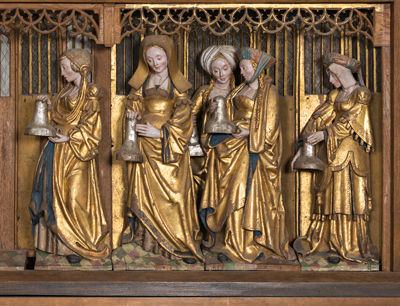 The story of the wise and foolish virgins comes in Matt. 25:1−13 and is one of Christ’s parables on the subject of which people will be allowed to enter in to the Kingdom of Heaven. Five wise and five foolish virgins were to meet the bridegroom at dead of night and escort him to the wedding feast. For this purpose they needed oil lamps, but the foolish virgins remembered only the lamps, not the oil. After running off, far too late, to buy oil, they returned and found the door to the banqueting room closed. The message is a warning of the consequences to those not mending their ways while they still have time to do so.

The predella and its figures belong to the altarpiece in Vaksala Church. Christ, the bridegroom, and the side panels are missing from the predella. The panels are in the possession of Uppsala University and the Swedish History Museums.