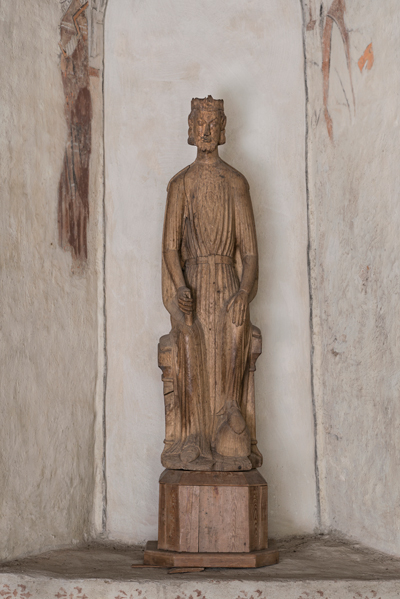 Oak carving of St Olof. Made in the mid-13th century in a Stockholm or Mälardalen workshop.

This carving instances the early Gothic style. It is plain as regards detailing, but still monumental. Olof is piously portrayed, seated on a throne. He is tall and majestic, and wears a full-length tunic with a belt at the waist. His features are serene, his gaze directed slightly downwards. He has a crown on his head. His hair is of medium length and cut straight, his beard short. His left hand rests on his knee, while his right formerly held some kind of attribute, presumably an axe or some other slim object. His left foot rests on a rounded, but not spherical, bump.

This sculpture represents St Olof, one of the principal saints of the Nordic countries. He was king of Norway and was martyred in 1030. He is often depicted as a king. Usually he is crowned and holds an orb or ciborium in one hand, an axe or sword in the other.

In the 13th century he is often shown with his killer as a footstool. Depictions of saints and Christ are sometimes accompanied by spherical attributes, representing the world or the firmament, by way of a footstool. The rounded bump on which the left foot of this sculpture rests, however, is neither but, presumably, a trace of English influence without any symbolic import. The carving and its design also testify to the aristocratic ideal prevailing in the 13th century.