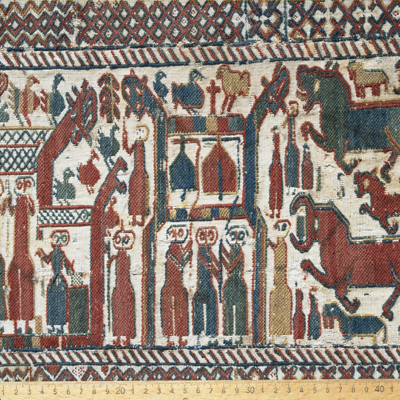 This wall hanging is woven with a linen warp and a coloured woollen yarn weft for the motifs. The white ground weave is tabby. The motifs in coloured woollen yarn are done in soumak weave. At the top, the wall hanging retains a termination of self-patterned tabby (huckaback) and linen tabby, probably a hanging arrangement. Self-patterned tabby also remains at the bottom, though in a very fragmentary state. This wall hanging was woven in an upright, warp-weighted loom (oppstadgong), in which the weaving proceeds from top to bottom. The weave in this kind of loom can taper in the middle, and the Skog Wall Hanging has exactly this distinctive narrowing about halfway. The right side of the weave is damaged and, judging by the “pull-in”, we may surmise that roughly 15 cm is missing on this side. On the other three sides the weave terminates in geometrically patterned borders.

The Skog Wall Hanging came to light in an inventory of Skog Church in 1912. It has been C14-dated to between 1240 and 1410, but was probably woven in the second half of the 13th century. Its theme has been hotly debated, and many different interpretations have been propounded over the years. The three human figures on the left are the principal bone of contention. One suggestion is that they represent the Three Wise Men; all three of them have stylised crowns and weapons.

In the middle of the wall hanging we see two buildings in cross-section. The larger of them is probably a church with nave and chancel and with a priest standing at the altar. The smaller one probably represents a belfry, with three figures ringing the bells. The scene can be construed as the church and belfry being attacked from two directions by enemies and animals – lions and horses – in two rows. A group of people stand at the church door holding axes, and others have taken refuge inside. To the left of the men with axes, a three-headed figure is riding a red lion. Possibly this is the Devil leading the assault on the church. Inside the church and belfry, people are ringing to bells to summon aid.

Narrative wall hangings like this have a long history as home furnishings. Several specimens are extant in the Nordic countries, some of them from the Viking era. Internationally, the Bayeux Tapestry is perhaps the best-known example of this kind. 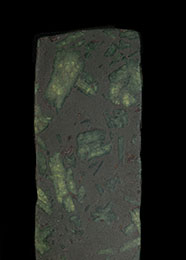 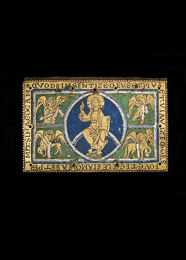 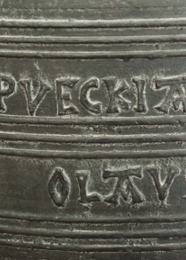 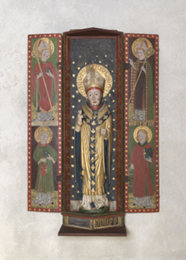 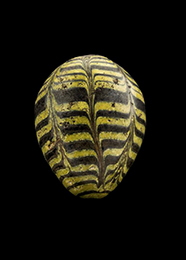