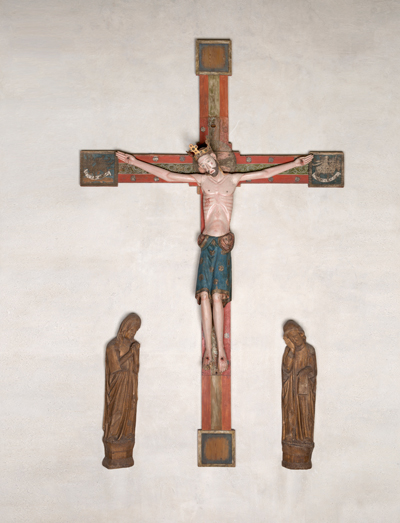 Polychrome triumphal cross of broadleaf wood, made in a Norrland regional workshop during the first half of the 13th century.

This crucifix shows Christ wearing a knee-length loincloth, painted blue, red and gold, and a Romanesque crown. The figure of Christ is frontal and straight, and the emaciated, long-limbed body hangs from the cross, to which it is pinned by four nails. The head has fallen to one side and the face is expressionless, the eyes open but unseeing.

The Latin cross is painted with pale rosettes and, in the middle, with a green trailing-vine pattern. This vegetative ornamentation is best preserved on the arms of the cross, the end caps of which carry depictions of the lion and ox, symbolising the evangelists Mark and Luke respectively. The vertical caps have no pictures, but ought originally to have depicted the eagle and the winged human being, symbolising St John and St Matthew.

This triumphal cross presents a mixture of the Romanesque and Gothic styles. Romanesque influences are evident in the frontal posture and the parallel legs, but above all, perhaps, in the crown, symbolising Christ triumphant. This, however, clashes with the Gothic depiction of Christ dead upon the cross. In other words, this crucifix illustrates the gradual evolution of the figure of Christ in medieval times, from king and victor to Man of Sorrows.