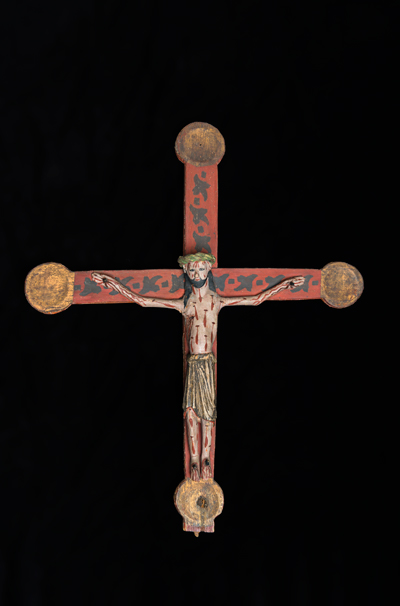 Triumphal cross of oak, made in Sweden c. 1200. The paintwork and crown of thorns are presumably late medieval.

This crucifix shows Christ in a knee-length loincloth and wearing a crown of thorns. He is depicted frontally, with legs parallel, and he is pinned to the cross with four nails. He is standing rather than hanging on the cross, as witness his arms, which are bent, not stretched. He is gazing straight ahead, and his beard and long hair are dark. Wounds have been painted all over his body, with blood pouring from them. The cross is painted red and black, with empty yellow end caps.

It is Romanesque in style and shows Christ victorious and triumphant. But the late-medieval paintwork and the retrofitted crown of thorns illustrate a suffering Christ, the Man of Sorrows. This crucifix, then, is an earlier object which was modernised in the late medieval period to suit the devotional ideal of the time. The encounter between the earlier victorious Christ and the later, suffering one is especially noticeable from the calm and open facial expression.