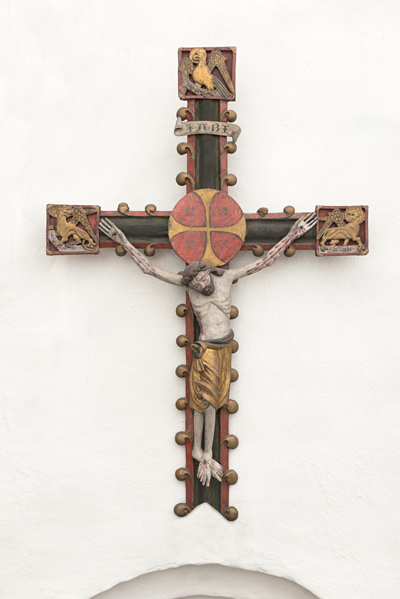 This crucifix shows the suffering Christ in a knee-length loincloth and crown of thorns. He is pinned to the cross with three nails and hangs limply. His head has fallen down towards his right side, and the body describes a very faint S-curve. The ribs are clearly marked, and the beholder sees the blood running from the wounds in hands, feet, forehead and right side.

The Latin cross is painted red and green, with gold detailing. The centre of the cross, above the head of Christ, carries a cross halo painted red and gold, with stencil-like flowers in the red fields. Three of the four arms of the cross have end caps with pictures of the symbols of three of the four Evangelists, namely the lion (Mark), the eagle (John) and the ox (Luke). The lower end cap, with the winged human being symbolising Matthew, has fallen off and been lost.

The triumphal cross played a very important part in the medieval Church as the centre of Christian belief. Its positioning, however, is not altogether clear. A strong scholarly tradition has insisted that it hung in the chancel arch of some churches, but there is much to suggest that this was not always the case and that if anything it was placed on the high altar, either free standing or on top of an altarpiece.

This may strike us as an odd arrangement in relation to the altarpiece, but the explanation lies in the status of the cross, which renders the entire Christian world picture intelligible. In this kind of context, the size of the cross in relation to the altarpiece is quite secondary. A different positioning is described in medieval times, with the cross standing on a pedestal in the middle of the church. The faithful could then approach it for supplication and prayer.