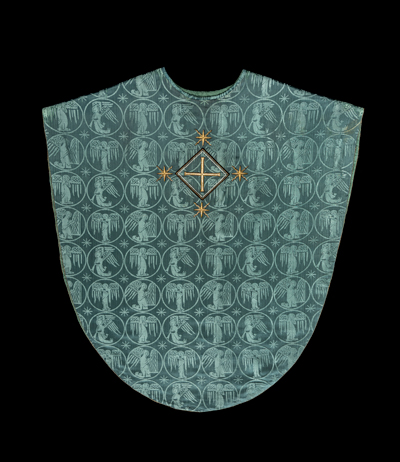 One green and one white chasuble of silk damask, made by Bevilacqua, Venice, to a design by Sofia Widén of Ateljé Licium, Stockholm.

The silk damask pattern of the green chasuble, “Angel Musicians”, has angels, in roundels, playing various instruments. Eight-pointed stars are inserted in the spandrels. The back has a cross with the letters IHS and five embroidered stars representing the five wounds of Christ. The front has an equal-armed cross inscribed in a square which is positioned in such a way that the embroidered stars complete the composition. 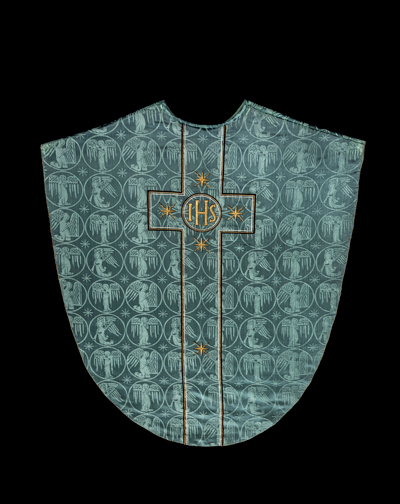 The white chasuble has the “Large cross” pattern with  stylized leaves and foliage. This motif was drawn in 1928. The back of the chasuble has a cross surrounded by sunrays and clouds. 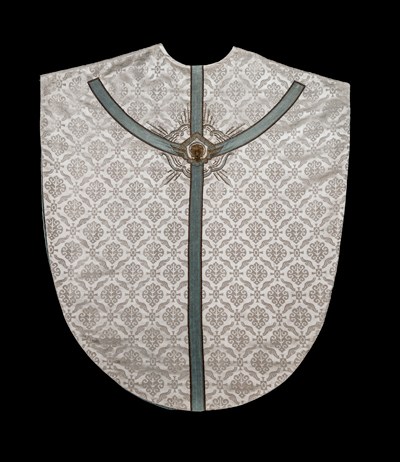 Both chasubles were paid for and presented by the church sewing circle. Interest in ecclesiastical textiles was running very high in the early years of the 20th century. Not since medieval times had the Church produced and maintained its vestments on such a scale. The newly awakened interest in the liturgy of the Church prompted a reintroduction of the different colours and the use of chasubles. At the same time, many churches began to feel a pressing need to renew their vestments. The end of the 19th century and the beginning of the 20th brought a resurgence of interest in textile research, mainly under the direction of Agnes Branting. She studied, among other things, the medieval chasubles of Uppsala Cathedral, and this impacted on the design of new chasubles. The St Stephen’s chasubles are an eloquent case in point – their salient features derive from medieval chasuble design. The chasuble was variously used in the 20th century. Nowadays, just as in medieval times, the chasuble is only worn by the priest celebrating the Eucharist, i.e. consecrating the elements and conducting the service. 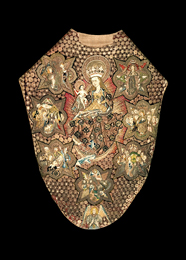 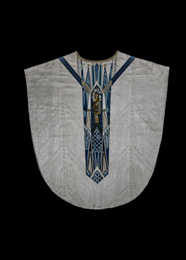