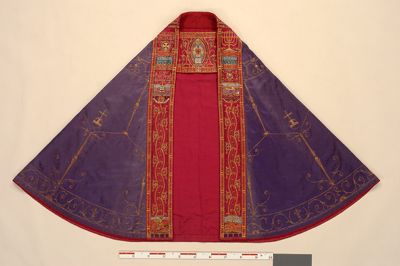 Cope of purple and red silk damask, with embroidery and incorporated insignia. A mitre goes with the cope.

The cope is semicircular, with orphrey, button placket and clypeus of red silk damask. The purple fabric was designed by Agnes Branting and woven at the Luigi Bevilaqua factory in Venice. The orphrey, clypeus and button placket are richly embroidered and decorated with the three insignia which were given to Archbishop Söderblom and which he had included in the cope’s decoration.

The Canterbury Cross, given to Nathan Söderblom by the Archbishop of Canterbury at his consecration as bishop, is placed on the right orphrey. The Order of the Saviour, a gift from the Ecumenical Patriarch of Constantinople, is placed opposite, on the left orphrey. The button placket bridging the gap, as it were, between the Churches of East and West, is embroidered with the Luther Rose (“The truth shall make you free”), the orb, the key of St Peter and an open Bible. The gift from the heir to the Ethiopian throne is placed on the clypeus. This is a Star of Ethiopia/Abyssinia, a filigree star with eleven points. St George and the dragon are depicted at the bottom of the orphrey, along with Old Uppsala Church with the three tumuli in the foreground. 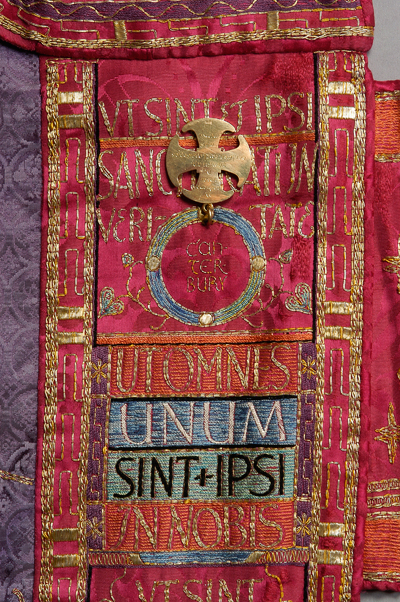 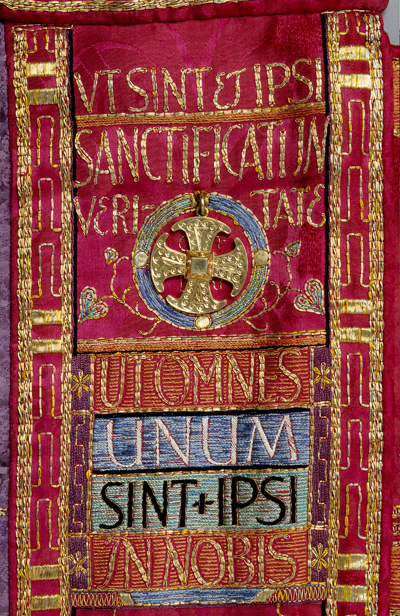 The purple silk damask has been given a simple but striking decoration of six orbs and a radiant architectural frame, the antecedents of which can be found in the design of medieval choir copes.

The Ecumenical Cope, as it is now known, was made for Archbishop Nathan Söderblom in connection with the Universal Christian Conference on Life and Work, which took place in Uppsala in September 1925. The idea of the cope was born after Nathan Söderblom had in 1924 received a sum of money from the heir to the Ethiopian throne, Ras Tafari, later to become the Emperor Haile Selassie.

The gift triggered the process leading to the creation of the cope, the design of which was jointly devised by Nathan Söderblom and Agnes Branting, who headed the Licium workshop. The final artistic design was the work of Ruth Hallberg. It was not taken for granted at that time that churchmen should wear ornate vestments, and Archbishop Söderblom was criticised for advocating an older practice where liturgical vestments were concerned.

Development and renewal of liturgical textiles began at the end of the 19th century and was consolidated during the 20th by several successful workshops, Licium among them. The cope is interesting both iconographically and artistically, and brilliantly illustrates the achievements of which Swedish textile art at that time was capable.