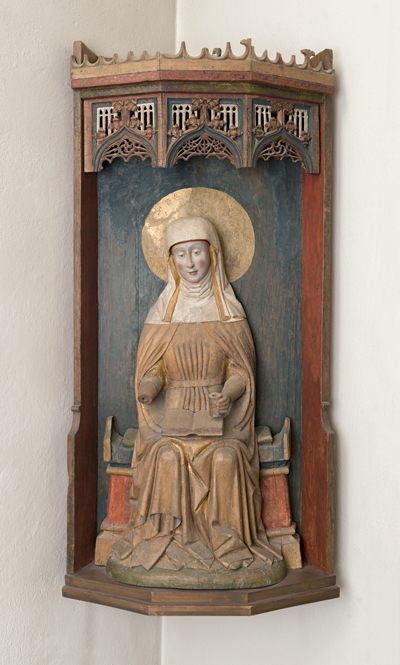 St Bridget is seated on a bench with a green cushion in a dorsal framed by Gothic tracery. She is dressed like a married woman, with head-veil and wimple, and is also wearing a golden gown and a pleated mantle with a blue lining. Her knees are wide apart and sharply emphasised by the drape. She is writing down her Revelations in a book on her lap. In her left hand she holds an inkhorn, and in her right she probably held a pen, which is no longer extant.

The cult of St Bridget grew fast following her death. Her association with piety prompted carvings, textile work and paintings on Bridgettine themes in many churches all over Sweden. St Bridget seated and writing down her Revelations was a popular theme. With a full-length figure like this one, we can see how well the seated saint lends herself to three-dimensionality.

The figure was carved in Haaken Gulleson’s workshop, and the features and apparel are typical of that workshop’s output. On the other hand, the iconography can be seen as somewhat antiquated, in that the throne and the inkhorn hark back to an earlier style, that of the 15th century, the reason being that this is one of three copies made of a 15th century original in Hälsingtuna Church. The copying underscores the firmly rooted position of the Bridgettine theme in Swedish devotional art during the closing centuries of the Middle Ages. 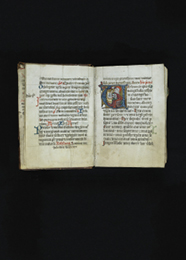 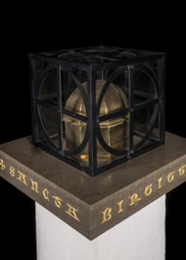 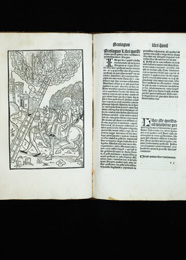