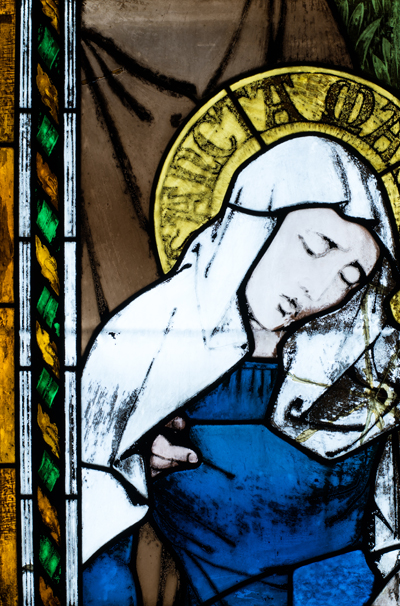 The Son’s Window is the biggest church window in Sweden, consisting of four scenes from the life of Jesus surrounded by architectural framework and decorative ornaments. The four scenes are the Adoration of the Magi, the Baptism of Christ, the Crucifixion and the Resurrection.

Agi Lindegren (1858−1927) designed the Son’s Window, after Dean Carl Axel Thorén’s four-part pictorial programme, in collaboration with the painter Acke Andersson, later to become famous as the plein-air artist J.A.G. Acke. Svenska Glasmåleriaktiebolaget, Göteborg (Gothenburg), then manufactured the stained glass from cartoons by Lindegren and Acke. Agi Lindegren was a supremely versatile artist who designed and restored several churches and secular buildings. He also took charge of the interior decoration of a large number of churches, Uppsala and Västerås Cathedrals among them.

These two panels from the Son’s Window are part of the scene of the Crucifixion, showing the Virgin Mary swooning in grief at the sight of her son’s torment on the cross. One arm and hand hang limply at her side, and her eyes and lips are half-closed. St John is holding her up, and his supporting hand can be seen under her arm. Mary is shown wearing the wimple of a married woman in medieval times and a blue dress. Blue was the colour of Heaven and kings, but also symbolised the Virgin Mary. 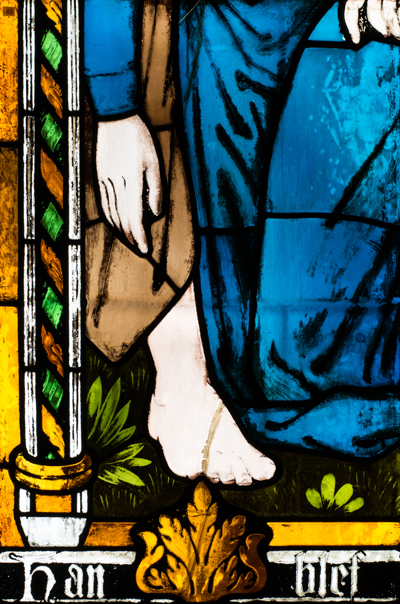 This angel comes from the tracery – the elaborate, richly decorated part at the top of the Son’s Window. Angels were a very common element of 19th century ecclesiastical art, and there were a host of different variants. The Cathedral, for example, has an orchestra of angels in the nave murals. This angel is shown praying and seated in a quatrefoil. The quatrefoil is a four-leaf-clover shape commonly used in Gothic Revival church interiors. The idea is for the angel to be perceived as sitting on a pleated cloud surrounded by radiant stars against a deep blue sky. 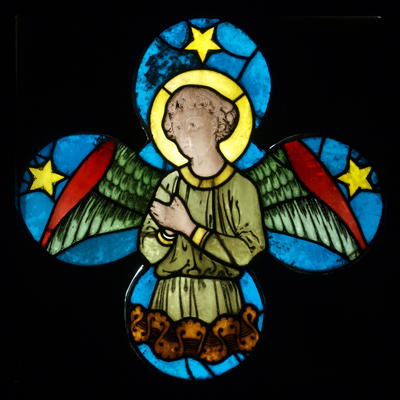 Insufficient knowledge on the part of Svenska Glasmåleriaktiebolaget concerning materials and technique, as well as severe time pressure in the production process, help to explain why the contours began to disappear from the Son’s Window only 30 years after it was made. Condensation and careless cleaning are another reason why ghost lines are all that now remains of the angel’s features and hands.