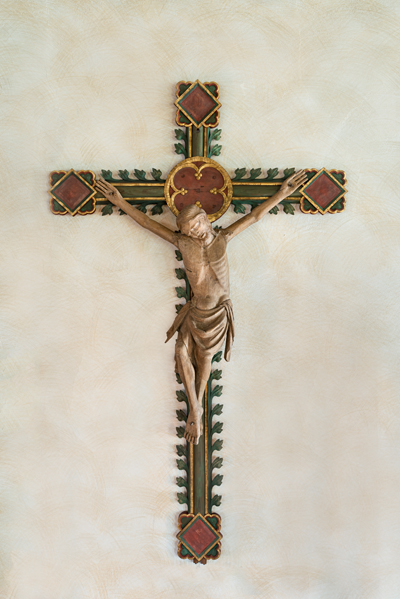 Triumphal cross of oak, made in a Mälaren Valley workshop during the 14th century. The cross is a reconstruction made in 1926 and modelled on the original.

This crucifix shows Christ wearing a loincloth and a crown of thorns. He hangs on the cross, to which he is pinned by three nails which have been driven through each hand and (one nail) both feet. He hangs limply, arms outstretched and his body twisted into an S-shape. His head, with the long hair, has fallen to one side, revealing a face with eyes closed. This figure was formerly painted, but all the paintwork has disappeared. The cross bearing the figure of Christ is painted red, green and gold. There is a crucifix halo in the middle, and the arms, which have end caps, are decorated with foliage.

The sculpture shows the suffering Christ, the Man of Sorrows. This way of depicting Christ evolved slowly during the medieval period. Whereas previously the Son of God on the Cross had been depicted as a king victorious, more and more emphasis was gradually placed on his death and suffering. This change became further accentuated in the 14th century. The Latin cross is designed to remind us of arbor vitae, the Tree of Life, through the green-painted leaves with which the arms of the cross are edged.