“The feast of the Ascension of Our Lord was the day on which King Erik was to gain the martyr’s palm and go to heaven.” Thus the Legend of St Erik. He was king. He was a saint. Or was he?

Erik is one example of a saint we really know very little about. He reigned in the 1150s, but what exactly did he reign over? He was celebrated as a saint, the national saint of Sweden. The story goes that he built churches, that he took Christianity to Finland, that people praying before his relics were cured of their illnesses. The relics still remaining are in his shrine, which contains the oldest regal crown in Sweden and Erik’s bones. So in a sense he is very real. In another sense he leaves most of our questions unanswered. No matter who he was when alive, he became part of the meaning of the Church to society in this remote corner of northern Europe, as the old chiefdoms of the runestones became kingdoms, with new legal systems and the beginnings of respect for the individual. Uppsala acquiring an archbishop of its own in 1164, a few years after Erik’s death, was also part of this process: Sweden became something in itself and at the same time something incorporated in a common European culture. Pilgrims flocked to the relics of Erik all through the Middle Ages – the cathedral was made to look as it does for the express purpose of receiving them in the best possible way. Now it is our turn to walk round the ambulatory and look into the choir. And if you go close, perhaps Erik has a message for you as well.

You find it in the St Erik Chapel. 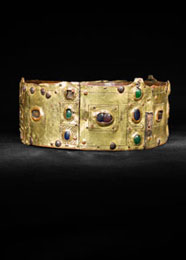